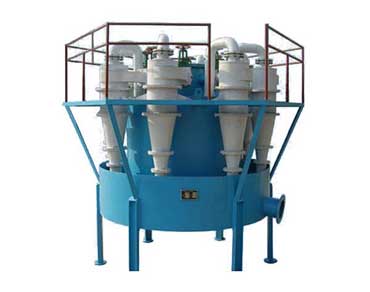 Email: mining@nile.ltd Whatsapp: +86-15137168510
Request for Quotation Services Online
Product profile
The Nile Hydro-cyclone is a kind of equipment for classification by centrifugal inertial force in rotary flow.
The slurry is rotated in the tangential direction by a certain pressure, and the slurry is deposited to the inner wall of the cyclone under the action of centrifugal force, so as to achieve the purpose of classification. At present, sand pump is used for direct feed of hydrocyclone.

working principle
Under a certain pressure of 0.04-0.35MPa, the slurry is fed into the cyclone through the feed pipe along the tangent line, and form a high speed rotary flow  inside, which produces a great centrifugal force. At the center of the cyclone, the slurry rotation velocity reaches the maximum, and the centrifugal force is also the largest. Regarding the slurry expansion around,and formed a low pressure zone around the central axis.A low pressure air column is formed at the central axis by inhaling air through the sand sink.
The slurry in the cyclone is not only the tangential rotary motion, but also the radial motion pointing to the center. The slurry near the center also has the movement along the axial direction, while the peripheral slurry mainly moves along the axial sinking sand mouth.
In the axial direction, the slurry has a zero velocity point which changes in direction. The connecting points form an approximate conical surface in space and become the zero velocity envelope surface.
The coarse particles in the slurry move outwards with the help of the resistance of the centrifugal inertial force customer service radial slurry flow, which remain outside the zero velocity envelope surface, and with the outer slurry spiral downward, finally discharged from the sand sink nozzle.
The centrifugal sedimentation rate of fine particles is slower, carried by the upward eddy current, and discharged from the overflow pipe.

Product characteristics
The structure is simple, the area is small, and the productivity is high.